What Kind of Christian Are You? Skip to content 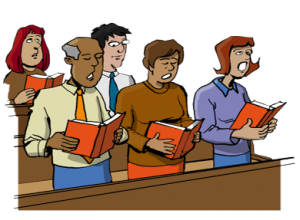 Last week I posted an article and video titled “Should Christians Practice Yoga” and “Why Christians Practice Yoga.” In the article I explained that we have liberty in Christ and that there is only one God, according to 1 Corinthians Chapter 8. Therefore, if a Christian desires to practice yoga or Christian yoga unto the Lord, God will honor his or her worship.  However, if a Christian believes yoga is ungodly, that they should abstain from yoga, for whatever is not of faith is sin.

Well of course, I wasn’t expecting to change Christian’s minds or beliefs regarding yoga. That was never my intention.  I know that the controversy over yoga, Christian or otherwise, will continue. But it did slightly bother me when I received an email stating, “What kind of Christian are you? My son thinks you’re a Jehovah Witness.” (Huh?) The rest of the letter went on to tell me the evils in practicing yoga. I replied with a brief response and let it go, but when I woke up the next morning, my spirit was heavy because I’m sure I offended many other Christians as well.

I prayed to the Lord at that moment and asked, “Lord, tell me if I am wrong because I don’t want to lead people astray.” And the Lord instantly put these words in my heart, “Don’t become a slave to fear.”

As I meditated on these words and what they meant, I began to reflect upon how the spirit of fear has shaped our behaviors and our world as a whole.

Fear of losing something or someone produces worry, jealousy, over protectiveness, and/or covetousness.

These common fears circulate throughout our world daily. But what does fear look like within the church? When you reflect upon the message from your pulpit, are you receiving a weekly dosage of faith, love, peace, or fear, intolerance, and legalism?

I once attended a church many years ago where all of the women seemed vibrant and glowing. I couldn’t put my finger on it, but they were ALL so beautiful. As I continued to observe these women I began to notice commonalities between them. First of all, all of the women had very long healthy hair. I also noticed that they all wore long dresses, didn’t have on any makeup and no jewelry of any kind. I attend several more sessions and really enjoyed the pastor’s messages. Then on about my fourth visit, in which I had worn pants, makeup and jewelry, the pastor’s message abruptly changed. He went on a long litany regarding what he claimed God said about a woman’s appearance. Well as you can imagine, he began denouncing all of fore-mentioned and used the Bible as his justification.

Now the Bible does tell women to be modest, but some churches turn it into an unspoken law and take it to an extreme in an effort to swell lustful thoughts and inclinations of the male church population.  Their fear of impropriety has put many women in bondage. Yet, Jesus said that if “your” right hand offends you, cut off “your” right hand. He also stated, if “your” left eye causes you to sin, pluck it out. He didn’t say change or alter what’s tempting you.  In other words, get the lust out of your own heart, and then the temptation will have no power over you!

My question to the Christian that fears yoga is “Why?”  This is a rhetorical question because I already know the answer. We serve the God of the universe, the Alpha and Omega, the King of Kings, and Lord of Lords. When Elijah challenged the people of Baal to a duel of the Gods, he gave them free rein for the better part of the day. He said, build your altar, make it bigger, scream louder, maybe your God is asleep! Even if their gods had a little power, Elijah knew that their power was no match for the true and living God. He wasn’t the least bit intimidated or fearful that these so called little gods would overtake him or get the victory.  When you know the power that you have and who you are in Christ, you don’t have to defend yourself or even put others down. You just need to believe, stand in faith and love, and the results will show for themselves.

Many years ago my spirit was so vexed listening to so-called Christians calling in a radio program concerning the national day of prayer. The topic was, “Should the president allow other faiths (other than Christians) to pray?” Over and over, Christians (or so-called Christians) were calling in and hurling out insults regarding other religions and the legislators for allowing anyone other than Christians to pray. Listening to their fear and intolerance made me nauseated. In my mind, what a wonderful opportunity to lift of the name of Jesus amongst all religions. Who knows, when the Christians prayed in unity, LOVE, and power, the glory of God may have come down and touched the hearts of everyone in the place and God would have been gloried. Just like he did when Elijah called down the fire of God from heaven and in one swoop it destroyed the altar that Elijah had created.

As Christians, it is not our job to judge and demean others or their religions. All we have to do is lift up the name of Jesus and the Bible says that ALL men will be drawn unto Him. Are the so-called god’s of yoga greater than our Lord? Why are we giving them so much power, allegiance, and attention in the first place? Paul said that an idol is nothing! Therefore if it is nothing, why not treat it as such? If Christians want to use yoga, which has more benefits than almost any other form of exercise, to improve their bodies, minds, and spirit in a positive way and as unto the Lord, what’s so evil about that?

Jesus said in Matthew 15:8, these people worship me with their lips but their hearts are far from me.  God also said that man judges by outward appearances, but God judges the intent of the heart.  In 1 Chronicles 28:9, God told Solomon, “And you, my son Solomon, acknowledge the God of your father, and serve him with wholehearted devotion and with a willing mind, for the Lord searches every heart and understands every motive behind the thoughts.” When a Christian practices yoga, God isn’t looking at the poses, he’s not even looking at what comes out of our mouths, He’s looking at the motives in our heart. Is our heart filled with whole-hearted devotion or are we just going through the motions?  Just like a person can go to church every Sunday for years, sing all the right songs, and say all the right things and have never have a personal relationship with God, so can a person practice yoga and love the Lord their God with all their heart.

If we need to focus on anything, it’s getting the fear, sin, negativity, and smudges out of our own hearts so that we can create a vessel that God can dwell in. It is that we deny ourselves and our own motives, so that God can live, move, and have our being. I believe there is so much more poison and evil residing in our own hearts at this very moment that is far more lethal than yoga will ever be.  I also believe, as a Christian yoga practitioner, that the elements of yoga (deep breathing, fitness, meditation) can be a wonderful “tool” to help us achieve this goal. The emphasis being “tool.” Yoga helps us to quiet our minds and much like meditation, can help us to identify and release the evils that plague so many Christian hearts- pride, fear, selfish, greet, hate, anger, and intolerance.

We need to choose the right battles and fear the right things. The scriptures tell us to Fear God! He is the only one with any real power. You may fear demons, but you have the power to cast them out. If you want to banish evil, you can find much better places to begin than yoga. I say, begin with your own heart. Examine your mind and thoughts in light of the fruit of the spirit. Do you judge, are you angry, do you doubt, are you a worrier, are you greedy, are you selfish, jealous, deceitful, manipulative, mean spirited, critical, a gossiper, or judgmental?

As each one of us brings our whole minds and bodies under the authority of Jesus Christ, we will be one less step away from creating a world that manifests God’s Spirit which is love, joy, peace, and faith. And these will go so much further in winning the world for Christ than denouncing yoga or any other practice we may disapprove of.

This sweeping fear that yoga is going to lead us away from God, worship idols, and open ourselves to other spirits is both unfounded and insulting to intelligent Christians. No one whose heart is right towards God needs to fear any of these things. When we go to a restaurant we don’t ponder whether the food was prepared in honor of an idol, however, depending upon the type of food you’re eating and their religious faith, there is a good chance that it is. No, we do as Paul said, and we eat the food and don’t worry about the intent of the preparer because we know that an idol is nothing to the Christian.

Many years ago Proctor and Gamble Corporation was said to worship satan and promoted the mark of the beast: yet, I would assume that the majority of Christians aren’t checking their detergent labels to see where they are manufactured and then boycotting certain companies. If the above is true, are we encouraging satanism and demon possession every time we watch a load of clothes?

And by the way, no I’m not a Jehovah Witness! I’m a born-again believer and disciple of Jesus Christ who wants to be led by the Holy Spirit and God’s Word instead of the rules and regulations of man. My heart-felt desire is to rid my heart and mind of the things that corrupt my spirit so that Christ can dwell in and work through me. It is a continual process.