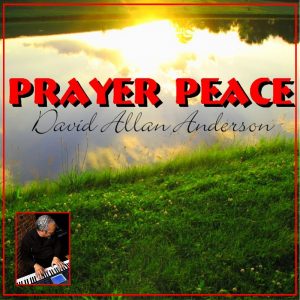 Honestly I didn’t compose Prayer Peace it sort of wrote itself. I was asked to provide music for a group of women who hosted a hour long prayer meeting on a weekly basis. It didn’t pay anything but I thought it was a worthy endeavor so I accepted. This gave me a lot of time for my personal meditation and reflection. During one of these sessions a thought occurred to me, what would God like to hear from me as I played the piano, what music would He enjoy?

Well I pondered that question for about 4 weeks while I continued to provide music for the group. Then one day as I prayed it dawned on me, every time we pray we are talking to God, why not ask Him directly. So I asked,  “God what kind of music would you like to hear today?” So I closed my eyes and asked God, “What would please Your ears today, what would You like to hear?”  What followed really surprised me because as I continued to play, the music started changing. I know this sounds crazy but it began to change styles and technique and articulation. I was playing with my eyes closed and was almost afraid to open them, for fear that the music would cease as soon as I did. Well this went on for about 30 minutes until the prayer leader signaled that prayer time had ended.

The next time I played I was alone and I asked the same question God, “What would you like to hear?” The same music resulted with a different theme and melody but the same style that was not the way I was accustomed to playing. This went on every week and I was thoroughly enjoying it although I was beginning to question my sanity.  Then one day when I was playing with my eyes closed and thinking that I was alone, I focused on really giving myself over to wherever the spirit wanted to go musically. I could actually feel that God was smiling as He inspired me to play for Him. When I opened my eyes there before me sat a frail little woman. She had such a peaceful contented smile on her face as she sat about 5 rows back. This  indicate to me that she was trying to respect my personal time of meditation, so I continued to play and she continued to sit eyes closed, with that same blissful expression on her face. When I finally finished playing, slowly she made her way to the front of the large sanctuary. It was readily apparent that she was ill. She spoke softly to me and said, “I need to tell you something. God really likes that music.” She continued, “As I sat there I could see a light shining down on you as you played. He was smiling! He wants you to keep playing  like that.  When you play,” her last statement really blew me away because she said, “I believe I have my healing now and I will start getting better”, and after she hugged and kissed me on the cheek, she quietly left the building, leaving me with a lot to think about.

About 3 weeks later she showed up again at a service looking very well & healthy with a big smile on her face. After service she came forward and asked, would it be possible for me to record what I played the last time she saw me? I answer yes. She said this is just what I need for my prayer time , so I made her a tape and called it Prayer Peace.  I don’t know if you believe that God inhabits music but I certainly do now. Request for Prayer Peace continued to the point that it was easier for make it available on itunes than burn and ship copies. People report different experiences while playing this music all point toward something bigger than my meager musical abilities at work. I hope that everyone is blessed as I have been blessed  by this gift from God.

To listen to a sample of prayer peace or order a CD of Prayer Peace visit Prayer Peace: Music for Christian Meditation and Relaxation.